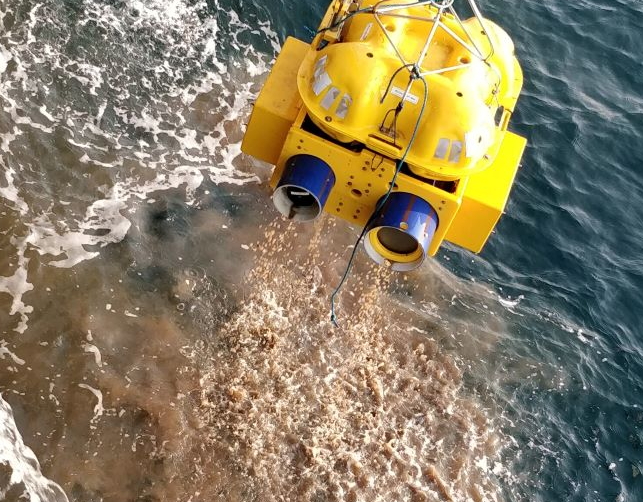 There is nothing quite like it for cooling the blood, as the song goes – or in this case increasing stress levels!

The team have made it to the Congo Canyon and have started work on recovering the seabed instruments.

The instruments were deployed in two batches – one set more than 200 nautical miles offshore in the distant, or distal, part of the canyon.

Here the water is very deep and instruments take a long time to surface once they have been released.

The other set is within 50 km of the coast, so at least recovery here will be a lot quicker as the water is considerably shallower.

The science project that these instruments were deployed as part of, is looking at how large avalanches of sediment flow from the margins of continents out into the deep ocean water and deposit on the seabed.

At the Congo margin the sediment flows down a very large scale and deep canyon.

Such sediment flows – or turbidite flows as geologists call them – carry vast amounts of sediment which can range in size from very find silt-like grains, through to boulders bigger than lorries.

The smaller, finer and therefore much lighter particles of sediment travel much further than the lorry-sized lumps.

Three massive flows occurred around Christmas and the New year and broke two internet cables that run down the west coast of Africa, cutting it off from the global internet for some time until they could be repaired.

So this research is more interesting and important far beyond the field of mere geological academic interest.

These flows also released all of the instrumentation moorings that another group within this project deployed into the channel itself, many of which have been lost as they roamed at the sea surface.

So our seabed platforms are all that has been left on the seabed recording data for nine out of the 12 months this project has been running – so what they hold is priceless in data terms.

To give you some idea of the vast amounts of mud involved, the instrument below has had a journey of ~5 km up through the water column before it was spotted and recovered.

On recovery out of the sea, out flowed the mud that had made it inside the platform and just settled there.

This is a very unusual sight, and even site, indeed.

On recovery to deck instrument platforms are routinely hosed down in fresh water to get the salty and corrosive seawater off.

This time out flowed yet more mud that had not managed to make its way out, either through its journey or while be hauled onto deck.

So after a good hosing down, inside it was still covered in very gloopy fine mud once disassembly started.

Including all around the ground motion sensors ….

and inside the outer protective plastic cover of the datalogger pressure vessel (white tube).

Made quite a mess!

So what this tells us is that not only can fine silty sediment travel a very long way indeed offshore, but also that in places in the oceans, the seabed isn’t solid and anything will sink in, and keep sinking until the sediment gloop becomes dense enough to bear the weight of what is sinking through it – and that could be deeper than an instrument is tall!