As blog readers will know one of our number is interested in maps, whether they be maps of the land surface – terrain maps – or maps of the seabed – hydrographic charts.

The UK’s Ordnance Survey and Hydrographic Office make such maps that are widely used globally.

In the UK, the terrain surface is measured in a variety of ways, but all include the installation of something to measure the height above sea level to.

On one of our team member’s bus man’s holidays, they took a trip to Ailsa Craig off the Scottish coast which – like Faial – is an island erupted due to volcanic processes, but nevertheless its height is important.

Here is the measuring point on top of Ailsa Craig – a triangulation pillar. 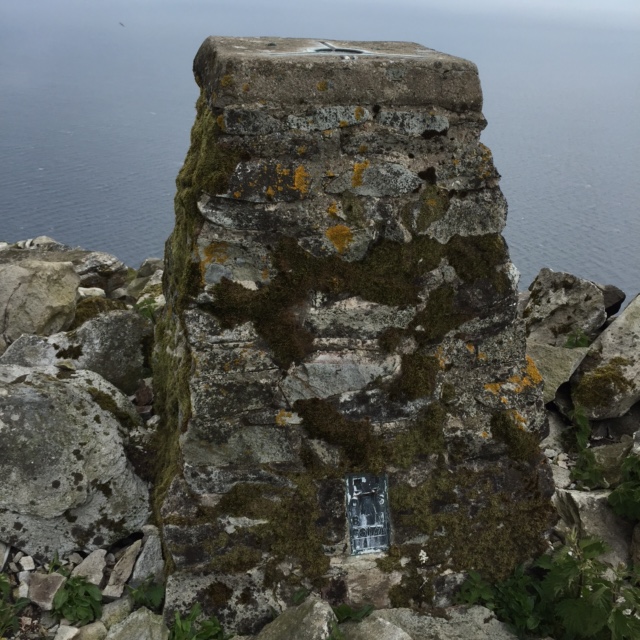 Made from rocks that were available on the islands.

Normally they are made of concrete like this one.

Good ideas are often copied, even on islands on the western most edge of Europe.

And what have we found on Faial overlooking the harbour ….

and across the flatter parts of the island.

… but regardless of actual shape, they all enable instruments that can measure height and distance very accurately to be installed on top.

Although there aren’t any active volcanoes in the UK, the concept of a triangulation pillar can be applied not only to surveying volcanic islands, but also potentially monitoring volcanic activity and – more importantly – when volcanic eruptions might occur.

When a volcano fills with magma, that causes it to expand like a balloon – not only pushing the land above it up, but also outwards.

So repeatedly measuring station heights and distances between them, enables spotting when this inflation is happening.

Although not in the case of these photographed on Faial, often such stations are instrumented permanently with GPS receivers these days and they send their readings back to a central station, where the ground surface motion is mapped and closely monitored as a means of trying to predict when a volcanic eruption might occur.