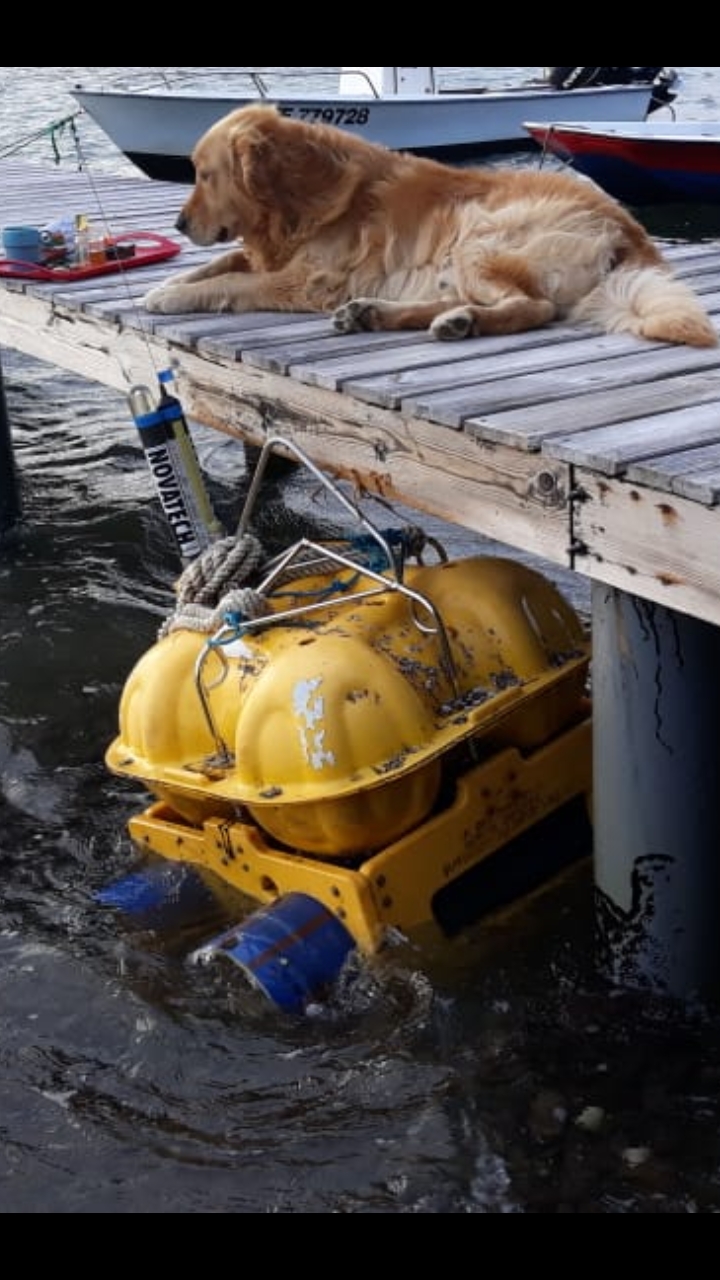 Blog readers will remember this instrument!

This is the ocean-bottom seismograph that we deployed onto the seabed in the middle of the Atlantic in Feb 2016 that washed up in a marina in Martinique in November 2018, still fully loaded with data.

Having been drifting about the Atlantic for up to 2.5 years its metal work inevitably had some damage and we have had to replace some of the parts, including some of the fittings to the pressure tube.

In cases like this, we always re-test any pressure tube before it is used again. Often we do this by suspending it on a wire to deep ocean depth if we have a data acquisition ongoing.

This time we have other developments which involve newly designed pressure tubes so we have taken the opportunity to test those at the same time, and using a pressure test facility that we have booked for the day.

There aren’t many of these facilities about and they cost quite a lot to use, so we have to make the very best use of our time and test everything new or repaired in one go.

A pressure test, as its name implies, applies the same pressure to what is being tested as it would experience under use. In our case we have a maximum operational depth limit of 5500m water depth, so all our systems have to survive that, and so need to be tested to beyond that – we test to 6000-6500m.

At that seabed depth that amounts to ~9600 psi (pounds per square inch of pressure – car tyres are inflated to about 30 psi) – or ~9500 bar – or 650 atmospheres. One atmosphere is what we experience at sea level on land.

This is an awful lot of pressure to withstand and so we have to think about the possibility that our tubes could fail under test – not that they will of course! – but they might.

If a pressure tube implodes under several 1000 psi it will create quite a shock wave and potentially rupture the pressure tank.

The key here is that the tube will only implode if it has an air volume inside it.

So the cunningly clever part of this is that we make solid baffles to fill up the air volume inside each tube, such that if it does leak, there is only a very small volume of remaining air to implode under the high pressure.

Here is one of the baffles we have for our large pressure tubes – ready to be inserted into the tube that we rescued from Martinique.

It inserts into the tube to quite a tight fit so there that is very little free space around the sides and at each end.

Once inserted, the end caps go on and the tube is sealed.

We also put the tube in a plastic pipe to protect the outer coating from damage and to allow us to tie a rope to it – we’ll reveal why later.

A tube with its baffle is quite a heavy thing – so its loaded onto a trolley before transportation to the pressure test rig.

The other new pressure tubes we are also testing are those for a development we currently have underway to measure the Earth’s magnetic field at the seabed.

These tubes are much smaller, but we have to do all of the ones we have had made, together with their end caps and connectors.

There is a bit of a rat’s nest of wires in these to deal with and make sure they don’t get pinched in the end cap.

But inside, this tube is no different from our datalogger tubes – just a lot smaller in diameter, which actually makes it quite strong compared to our bigger tubes which have to have much thicker wall thicknesses to compensate.

Regardless of its petite size, it still needs a baffle before testing. 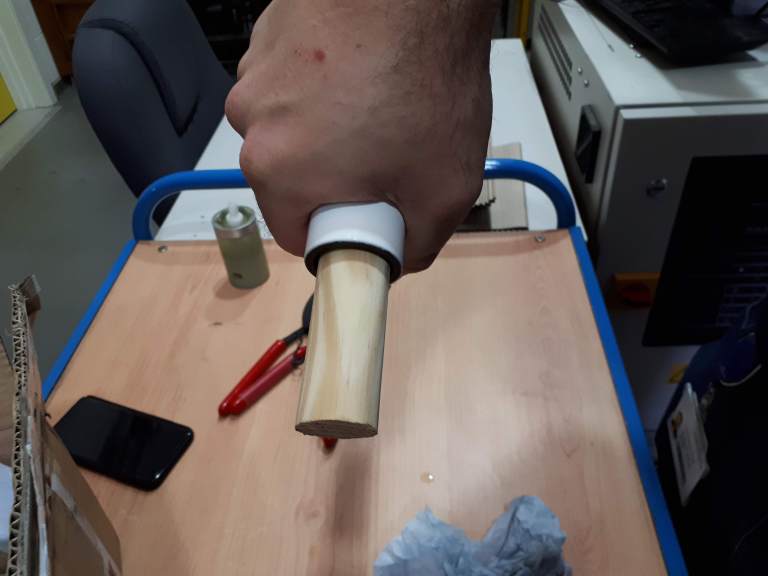 And here is why we need a rope.

The pressure tank is designed to accommodate quite large things, and so if we just drop our tubes in, they will sink to the bottom and we won’t be able to get them out.

So we add a rope, and attach to that rope a stray line made of rope that floats – as long as its longer than the tank height, getting our tubes out is then easy!

….. followed by a bucket containing all the small tubes – again with its rope and stray line.

While anyone is putting things in or taking things out of the tank its lid is supported by a steel beam to avoid “accidents” – the lid is quite heavy. 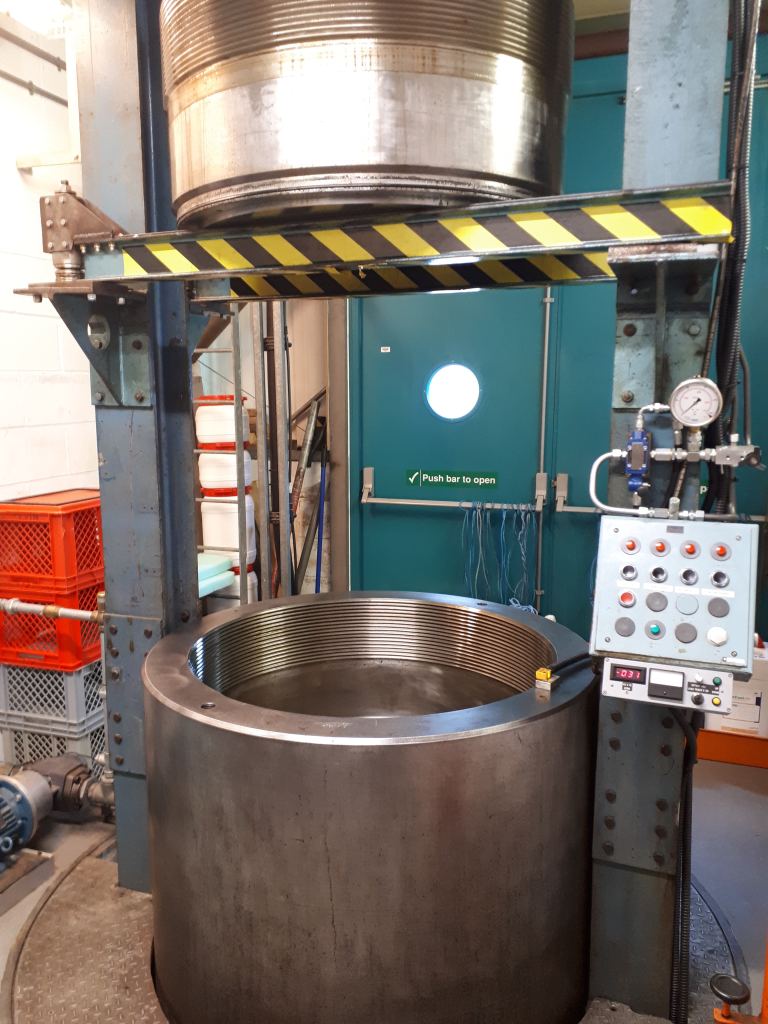 When fully loaded and ready to go, these beams are removed and the lid lowered into position. 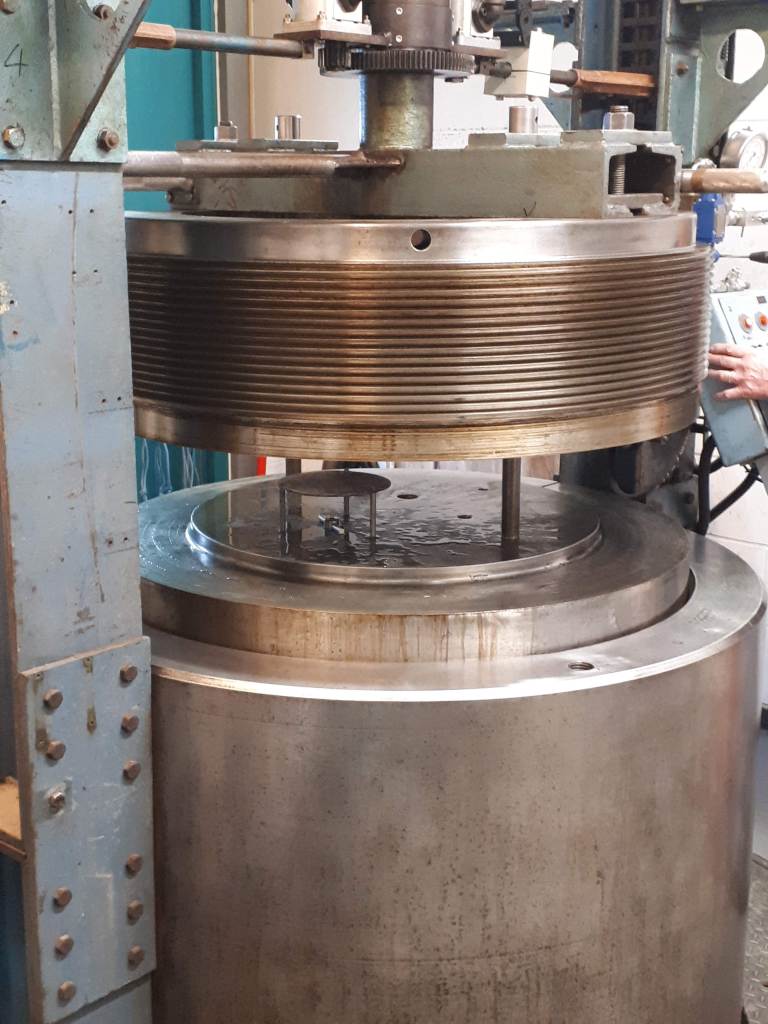 It is a two part system, where the top is threaded and is screwed into place.

Then the pressure is gradually increased and the system left for several hours.

We are pleased to report that every tube passed with flying colours, and so they can now be used in September when we will test their contents in “battle conditions” during a data acquisition offshore west Africa.